January 17, 2021 by President Costumes · Comments Off on Make Your Own George Washington Costume Ideas

For your next patriotic celebration, you can dress up as a great historical American legend. George Washington is one of the most popular heroic political leaders in the history of the United States, Due to the significant influence and role he played in the formation of the United States, President Washington is commonly referred to as “The Father of His Country.” His reputation as a legendary American hero is the reason why President George Washington costumes are an endearing favorite with both children and adults who want to celebrate patriotism. This will also make a great Halloween costume this year! If your child wants to dress up as America’s first president, here are some suggestions on how to complete his early American outfit and look! President Washington’s outfit of his time was described as simple formal attire, consisting of a long white linen shirt which was tucked into tight-fitting knee britches. Over this, he wore a velvet waistcoat and long colonial jacket which was considered essential men’s wear for the period. On his feet were long white men’s stockings and a buckle-type shoe. Finally, the ensemble was completed with a velvet topcoat and a colonial tricorn hat. And of course, all gentlemen in the eighteenth century wore white powdered wigs. So what do you need to create a George Washington costume for your child? 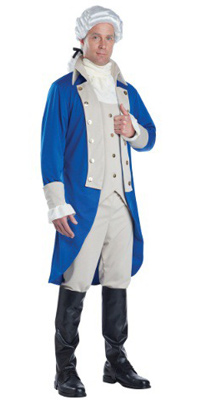 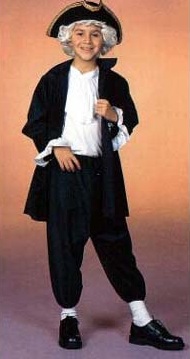 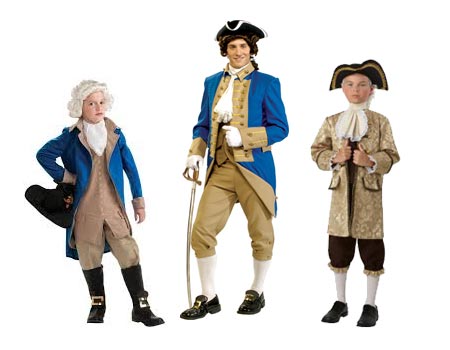